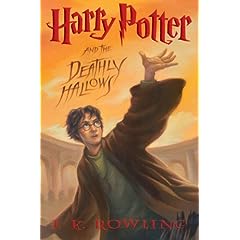 So, I didn't put Harry Potter 7 on my Summer Reading Thing 2007, but I've added it now. What was I thinking? Like I WASN'T going to read it this summer? Whatever. So I got it around 12:20 Friday night and finished it Sunday. Beyond the great story, I love seeing how Rowling's overall writing has improved. She's been a great storyteller ever since Sorcerer's Stone, but through reading her books you see her growth as a writer, and this one was really well done, with certain sentence structure and description I found myself wanting to remember for my own writing.

*Hermonie and Harry comfort each other

and then on Julie Wright's blog I said no way was Harry a Horecrux.

Well, I was right about one thing for sure, and kinda one other thing, maybe a third if you really stretch, but I won't tell you which ones.

I read this in about 8 hours, around page 300ish it sagged a bit for me, but it also seemed like there was a lot more introspection in this book which generally slows the pace. Rowling is brilliant in her descriptions of places and people, compacting so many details into a sentence or two, and her imagination leaves me in the dust. There were a few twists I didn't quite understand, and I should go back and read through them to get clear, but the book is 759 pages, I was lucky to read it once, let alone go back to it.

I loved the book and she ended it in a way that was very satisfying. I'm not even that sad that the series is over. If I were Rowling, I would want to end on a high-note and in our day of critics, how long can that last? Too much of a good thing eventually sours and so I'm impressed with her commitment to move on and wish her the best. Can't wait for the next two movies. I've watched the first four twice in the last two weeks--can't wait until we have all of them.
Posted by Josi at 5:44 AM

I haven't kept up beyond HP 1 and 2, but after reading this blog, I'm heading for the bookstore. This last one sounds intriguing. Thanks for the tantalizing info, Josi :-)

I also made predictions, and almost all of them were right. But sadly, I can't talk about my prescience for fear of being lynched by those who haven't read it yet.

Loved the book, Josi. But I am glad to see it go and also anxious to see where she will take us with her next book. As we all know, it's difficult to keep the excitement using the same characters in every book, and she did it. And yes, she did improve in her writing with every book, as every good author should.

I've never seen so much hubbub about a book release in my life - how would it be to be the author on the other end of that?

I am like you and Luisa. I can't talk about what I got right and what I got wrong because i'd get lynched. But man I feel gloating over how much I got right! (let's not pay attention to all I got wrong in my predictions)

I only made two predictions--one about Harry and one about Snape, their final outcome. I was right, but I had no clue how she would get us there.

I liked it. I agree, her writing has grown. But what's with all the colons/semi-colons? Do they do that in England? None of her other books had that many.

Thanks for writing this blog. It was fun and got me itching to find out about my own predictions. No, I haven't read it yet, ONLY because I was in China when it came out, and my children are now devouring it.

Yeah, they do that in England--all the colons and semi-colons. I find it hard to let them go.

Ha! I'm like Anne - I only JUST started HP1 this weekend! I can't wait to find out which things you were right on (and which wrong!).

You've been tagged on my blogspot, Josi. Just go to http://candacesalima.blogspot.com to get the questions. Yeah, you can blame Anne Bradshaw, she's the one who tagged me.

I finished it rather quickly as well. I was right with most of my predictions, but like the rest of you, not saying which except for Snape and Harry. Now if my kids would just hurry up and finish so that we can have a real conversation and not these furtive whispered ones where those of us that are done keep looking around to make sure we don't spill anything to those that aren't.