I was once told there are two kinds of women in the world--one that sees their hair as an accessory; a mode of expression that can be done and undone and redone at any time. These women often change their color, length and style on a regular basis. They see every change as temporary. Often, they act somewhat impulsively and follow current trends.

The other kind of woman sees her hair as an extension of herself, something connected and ingrained as a part of her. The kind of woman often keeps one basic style for long periods of time. She might make changes, but they typically enhance her current style rather than create a new one. She will usually contemplate changes for a long time before proceeding and has a high dissatisfaction rating because, even when she makes a change, she often pines for the security of past styles and wonders things like "What the hell was I thinking?" When people tell her they like it, she assumes they are lying--if they tell her they don't like it, she cries. And even if there are things she DOES like about it, her insecurity about the drastic decision she's made is very hard for her to overcome, which then makes her feel like a vain prima-donna. She looks forward to next week when she's gotten used to it and swears she will never cut her hair again.

Take a guess which one I am? 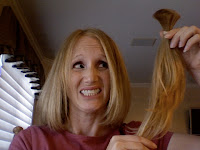 Oh Josi! You are such a trend setter--I had no problem picking you out as a modern "to hell with it hair day type a girl" can't wait to see what CRAZY and WILD thing you do to your hair NEXT! But maybe slow down next time--you move a little fast ;)

Just remember, it WILL grow back if you regret it. And I usually do. :)

I LOVE your new do! Very cute! I'm the first kind of woman I think. lol

Did you donate your lovely locks?

LOVE the facial expression! And really, the hairstyle looks fab on you. Frames your face in lovely fashion.

I feel your pain! When I cut 14 inches off mine I wanted to DIE (and it took me about 4 months to decide to cut it in the first place). The great thing though is short hair is much cooler in the summer, and takes less time to do every day. :) Plus, it looks adorable on you!

It looks fantastic!!! Lucky. When I get my hair cut, I look like my brother for two weeks (yes, he has longer hair...and a mustache. No similarities there. I hope).

I cry at least once everytime I get my hair cut. But yours really looks great! =)

The good news is that you could buzz your head, dunk yourself in a puddle of mud. and come out looking great.

Your hair looks fabo....nothing wrong with wanting a change, being afraid of a change, wondering if changing was the wrong thing to do, or wishing you had changed your mind to begin with. Anyway, it looks darling on you!! Great style choice.

You are awesome! You look gorgeous!

Whenever I see someone's new 'do, I just ask "Do you like it?" That way I can just damage control as needed!

Let us know how you like it a week after the hairdressing conditioner has washed out, and you're in the midst of summer. THAT'S the sign of a haircut's worth!

Josi, you look gorgeous! And I agree with Annette--you're so beautiful, you could do anything at all to your hair and still come out looking great!

You look great...you're giving me courage for my haircut appointment today. Eeeek!

It is gorgeous, but I am so with you on being the latter of the two types. Let yourself enjoy it! It really is very flattering.

How fun! You're a brave woman. I promise, you'll eventually figure out that it really is you in the mirror. :)

Coming from an extreme #1 type of girl - KUDOS!

It does look great - and I'd never lie about that! I'd rather be honest and make people cry than give false hope - LOL

You're making me want to crop mine short again, but I've promised my husband that I'll keep it long as long as he doesn't pull my ponytails! *sigh*

Adorable!!!
Annette is right- no matter what you do you would look great!

It's a great length. I like it. But I'm a #2 myself and usually start growing out my rare short haircuts, the day after I get them.

How funny - my friend and I were just discussing this very topic. She was nervous about touching up her roots by herself because she hadn't done it before. I commented that I figure it's just hair - it can always be changed/fixed. Her reply was that yes, it was her hair, therefore a big deal. :)

I am obviously more of a #1 type gal.

Love your description of the counter argument - you always make me laugh. I'm not sure whether I should tell you that I like your hair or not, though - I don't want you to assume I'm a liar. ;)

AAAAAHHHH! You look fantastic! I absolutely love it.

I am totally woman #1, and figure you can always re-dye or grow it back out.

I really, really love that cut on you. FAAAAAABBulous!!

Dude! Your hair looks great! No matter what, it won't look as bad as those styles we had in High School!

I love it! And I am not lying! I am the second personality too (big surprise, huh, since my hair style hasn't changed in nearly two decades). I can't wait to see you tomorrow!

Cute! Cute! Cute! I have had the same hairstyle for...hmm....ummm...my son is almost 10, and I had the hairstyle BEFORE he was born. Yikes...I am sure that I will be 80 with this same hairstyle. If it ain't broke...don't fix it. :) (my hair has a mind of it's own, not straight, not curly, just un-ruly...I swear this is the only low maintenance haircut I can ever have)

I love it! I'd guess you're the second type because the first type (like me) wouldn't even think twice about the process and therefore would not realize there were two types. :)

I think it looks great!:)

You crack me up!