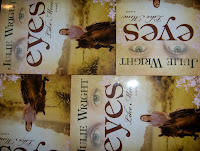 I was able to leave the trunk to the car open for a couple hours while I was at work (mostly I blogged, I'm such a great boss.) It dried out really well and we were able to reload, then I picked up Julie and we serpentined all over Vegas before finally calling the store--Dora apparently does not like Vegas and she refused to help us. I think she was really mad we didn't get to cheesecake factory last night too.

We got to the store and were able to get a grand tour of the new digs. Deseret Book has launched a pilot program where they combine the DB bookstore with a distribution center, complete with garments and temple clothes. The Vegas store was the second of these remodels we'd seen--the Lake Oswego store had also recently rennovated. It's a nice gig for both stores and customers; giving them a one stop shop. The Vegas store is particularly nice because it has a whole level dedicated to the distribution items and has a lot of room.

We got to chat with some more fun people down there but discovered that the hot temperatures had ruined the chocolate we'd been giving out. We ate several of them and although they tasted great, they looked a little funny so we decided we would give the rest to our kids who wouldn't care that they looked funny. Bummer for the rest of the people coming to our signings though. Sorry. 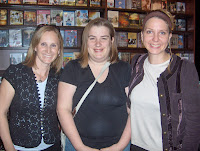 After Vegas we hit the road, yet again and headed over the state line to our signing in St. George. We crossed yet another time zone but it was still warm, which was nice. We met up with a freind of mine, Nida Lloyd at the Hope Chest Thrift store where I found a few awesome shirts! $18 for six of em--yeah baby! Then Julie and I headed to Deseret Book. They had also just added a distribution center to their store--so we were in 3 of the 6 stores they are trying this in, which is kinda cool. Paul, the manager there, is awesome, and Alexis came up from Mesquite to see us--it's always fun to meet cyber people in person. We got to chat with people and sell some books and a cute little 7 year old came in that made me miss my KB more than ever. 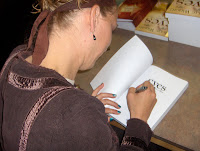 After the signing we headed for Julie's parent's house, where we are staying tonight. We had a great dinner and Julie got to see her daughter who lives in St. George too. We are now blogging and uploading and getting ready for bed. I am SO excited to be home, but am also glad Cedar City is our final signing. I have some friends coming and so it's a great way to end the tour.

I'm not sure when I'll find time to blog the wrap up for the tour--I'm missing my family like crazy and suspect that this weekend will be a lot of catching up with them. So, in case it takes a few days for me to get to it I'd like to thank everyone who set up a signing, came to a store, told someone about a signing, read the blog, twitter, facebook updates and wished us well. Honestly, the tour exceeded our expectations. Even with the hiccups we encountered it was a really great trip. When we finish with Cedar City tomorrow we will have hit 23 stores, driven about 4,000 miles, met hundreds of people and signed hundreds of books. We've seen places we've never seen before, had conversations we'd never had, and made friends with people we'd have never met. Thanks for the great support, it really is priceless.

YIPEE for Cedar City!!! My turn! Can't WAIT to see you guys!

Thanks for signing my books! I wish you the best of luck in all your publications!

What a great trip. I love the feeling of coming home though. Nothing beats it :)

What's parumph? I'm so glad you're both coming home. After you've recuperated, we're totally doing indian and I SWEAR I won't flake. I'll crawl if I have to. =]