Check out the Cover for Blackberry Crumble

Shauna Gibby at Deseret Book never ceases to amaze me. She's come up with yet another fabulous cover and I couldn't wait to share it! Blackberry Crumble will hit stores in March of 2011. 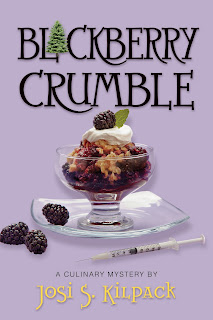 “Modern Miss Marple: A Magnet for Murder?”
by Jane Seeley, feature reporter, The Denver Post
Local “celebrity” Sadie Hoffmiller has been involved in a number of unfortunate situations that have taken her to crime scenes from London, England, to Miami, Florida, and even in her own backyard of Garrison, Colorado. But is she truly an unwitting bystander in all these investigations? Or is she something more? Is she, perhaps, even the cause . . . ?
***
The word is out about Sadie Hoffmiller’s amateur detective work, but it’s not the kind of publicity Sadie wants. When Jane’s article threatens Sadie’s reputation in the community, she accepts her first investigation-for-hire and travels to Portland, Oregon—if only to give herself some space from her whispering neighbors. And from Pete, who's sending her mixed signals about their budding relationship.
Sadie hopes the Portland air will clear her head, and she is eager to get to work for May Sanderson, who has suspicions about her father’s untimely death. Putting her detective skills to the test, Sadie delves into a complicated past that includes a business partnership that didn’t end well, several unsavory family secrets, and more than a few motives for murder.
Sadie is afraid she might crumble under the pressure, but in a new place with new recipes, she finds herself more determined than ever to uncover the answers buried in scandal, insatiable appetites, and pure and simple greed.
Posted by Josi at 3:52 PM

Love the cover! Delicious food and a nefarious needle. What a perfect combination. Plus, it's got my favorite color as a backround - purple. Congrats! =D

I love the cover! I love all your covers! Can't wait to read it.

That dish looks like it's jumping off the page!

The cover looks great, and the books sounds delicious! I enjoy Sadies adventures.

This is so cute, I can't stand it!

Waiting will be tough! So glad it is on the way.

I love the new cover! You've made my mouth water in anticipation for the new read and the new recipes! Can't wait for it to hit the shelves!

That picture looks very familiar. Is it wrong to admit that there were both blackberries and syringes on the counter when I made the crumble recipe? Yeah, probably so.

Love the cover, and can't wait to read it!

Yummy! My only question is: What kind of syringe is this? I've never seen anything like it...measuring 1.6 ml? Oh, well, this is creative writing, right? :-)

Great cover! I called my wife over to the laptop to see it. Four thumbs up!

Oh my heck, my tummy squirms at the sight of it. Love the cover! Brilliant!

It looks awesome and is my favorite color! You go girl! LOVE IT!

The cover looks great. The series has been such a fun read. I have enjoyed them all. Can't wait for this one to come out.

And you forgot to mention just how flippin delicious the main recipe is! I'm excited to read it!

Love the cover and can't wait to read it!

I was eager to read this simply based on the fact it's Sadie, but that blurb has me all agog now!

Yum! Purple is my fav color.

Could I BE anymore excited about this coming out? I think NOT!!!!!!! It looks awesome, Josi! I honestly cannot wait!

It's beautiful Josi - can't wait to read it!

Awesome cover! My mouth was watering--until I was distracted by the syringe. :)

How many days do we have to wait for this to come out?

I'm so glad that you are still writing. I can't wait for Blackberry Crumble. My daughter and I both read your books and can't put them down once we get them. I guy two and mail one to her.
Thanks so much for writing them

Yeah! I cannot wait! I am so excited. I got my 15 (almost 16) tear old daughter hooked on your Sadie books. They are so fun.

I have read all of your books and am dying for you to write more. No pressure. ;-)

Congrats on running a half marathon. I ran last year and you beat me handily (my best was 2:41). I am going to get faster this year too. ;-)

I meant to say that I ran 5 half marathons last year. ;-)

I just finished your book in 2 days. I loved it! Your books are so hard to put down.

Just finished Blackberry Crumble. Loved it. I really enjoy Sadie and her adventures. I can't wait for Pumpkin Roll to come out! ;) Plus my family loves all the recipes. Thanks!

I love that book i just finished reading it and now i'm starting punpkin roll. The Bacon ice cream shocled me. My freind and I were planning on making it:) just for fun