Lee and I went to the Duchess last night. It's rated PG 13, based on a true story, and stars Kiera Knightly (who I quite like). It's the story of Georgiana Something-or-other who became the Duchess of Devonshire in the last 1700's. The catch phrase I had heard was that "She could seduce everyone in England except her husband" this did not turn out to be the case. She was not a seductress or woman of questionable character, she was instead very bright, very engaging, and very admirable in many ways. The whole point of making a movie about her is because she was so remarkable, especially for that period of time. I happen to love Regency England, and so I loved many things about the movie--the dress, the cultural views, the intrigue of social class and I felt it was all very well portrayed and meshed well with the things I know of this time period. However, this is an adult movie. There are several bedroom scenes that, although not graphic, are very 'clear' on what is happening. There are adult themes of mistresses, infidelity, illegitimate children and all such things you can pretty much expect of a marriage based on nothing more than power, inheritance, and social standing. There were several very gripping and heartbreaking scenes as you watch a young woman of ideal and optimism realize that she does not live in a fairy tale and she never will. It was a powerful reminder of how grateful I am to live in the day and time and circumstance I do. Equality is an amazing thing and although I wouldn't call myself a feminist, perhaps it took women of that kind of aggressive zeal to save the rest of us from the powerless existance so many women lived in without chance of recourse. There was on scene that had me grinding my teeth--reminding me very well that Hollywood (or BBC films) is still behind this story. It's a scene about 1/3 way through the movie where the Duchess's freind is trying to show the Duchess that intimacy can be pleasurable. It didn't too too far, but it was too far in my opinion. Nothing graphic, but sensual between two women and completely gratuitous since it was not necessary to make the point. Scenes like this really chap me--and I'll be writing someone a letter to tell them so. They will probably laugh at me, but the film itself was so well done and powerful--to have thrown that in was like an onion in my fruit salad! There is also female back nudity where a maid is running from the Duke's bedchamber--also unnecessary but without the sensuality of the other scene. All in all, in case you can't tell, I really liked this film but I will probably never own it because it's not one I'd want my kids to watch. It's very much about sex and how it related to adult relationships of this era. 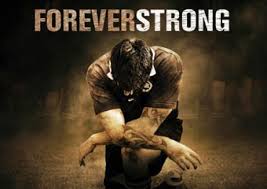 Forever Strong is also based on a true story, is very different from The Duchess, and a great family movie. I believe it's rated PG. It's about a young man who plays rugby on his high-school team in Arizona where his dad is coach. He is on a bad path and ends up sent to Juvenile Detention in Utah where the head of the Detention center realizes his skill at Rugby and gets him on the Highland High School team, the ongoing national champion and nemesis of his old team and his father. The Highland High Rugby team is coached an amazing coach whose name I can't remember. The story follows the transition of this troubled boy as he is coached in Rugby, and life, by the high ideals and genuine compassion of this coach. This is, I believe, a local film and yet you would never, ever guess it. It was very well scripted, very well acted, and wonderfully filmed. They have fabulously done rugby shots, and it is one of, if not, the best filmed 'local' movies I've ever seen. Not only that, the filming and acting beat the socks off many sports based movies that have been released nationally. We took our kids to see this for family night and we all really liked it. It has a great message, but you don't lose the story in it. If it's showing in your area (Utah) please take the chance to see it so it can be well supported. It hasn't had a lot of marketing and such but is really really well done. Unlike some other local films, this isn't something you would do as a favor to the film maker, to support local companies, you would be doing to get a great experience. Believe me, it will be worth the $$ and the time. This is one I will definitely buy as soon as it's released. You can watch a trailer about it here. I believe it's been in theaters a couple weeks so it might not be there much longer. It was directed by Ryan Little, who I think I went to high-school with if he had a twin brother named Chad (I think). That would be a cool little coincidence if it was true so if you know whether Ryan Little attended Olympus high-school and graduated in 91, let me know.

Anyway, there's my thoughts. Have a great weekend.
Posted by Josi at 4:13 PM

Thanks for the review. I knew it would be a good one and I can't wait to see it. I haven't been to a movie in over a year. Are you feeling sorry for me yet? Hey maybe when we come for T-Day. (I hope...I hope...I hope)

Great reviews. I wanted to see The Duchess too.

Well I, for one, hate Keira Knightley. Can't stand her. So, I won't be viewing the Duchess anyway! However, Forever Strong looks interesting. If we don't get it in the theater, I'll definitely look for it on video. We saw An American Carol this weekend and it was irreverent as anything, but funny as heck and made some great points.

Awesome reviews! I'd really like to see Forever Strong, it sounds great.

did you know your little bros Matt & Sam are in that movie? hey are in the stands during a game Sam Said--so there ya go!

I did NOT know my brother's were in Forever Strong--no one tells me anything! Could they have gotten me free tickets? They are so fired!

Great reviews Josi, thanks! I want to see the Duchess, but wasn't sure about the sexual themes. Also, I'm interested in Forever Strong, but thought it was one I'd like to see with my boys but wasn't sure it would be okay for them. I'll probably wait till it comes out on video, but it's nice to know I could rent it for when we're all together.

I'll have to see if that movie is here up in outer darkness or not. We often time miss all the good "utah" type movies. Thanks for the reviews. I am always looking for some good movies.

I haven't seen either but would like to. Thanks for the review.

Great reviews. I'd like to see the one about Rugby but I'm sure it won't ever play here. I'll have to get it on DVD.

As usual, I always enjoy your opinions (and I love that you write letters about stuff because I do, too).