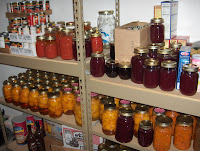 Though I'm a zealot now, I was far from converted to the gospel of home canning when I entered adulthood. Quite frankly, I thought canning was a hideous waste of time AND that the only people that did it, did it because they were poor. Yes, my mother often talked about the high quality, how much better it was for you, blah, blah, blah, but I hated canning, let me say that again, I HATED canning.

I grew up as one of nine children. My mother stayed home and my dad taught school. Canning was a necessity. We had a HUGE garden and numerous fruit trees. In addition to our own stuff, because we had nine kids, people often called us to finish off their fruit trees. Every summer we bottled hundreds and hundreds of quart jars full of all kinds of things--cherries, apricots, peaches, pears, tomatoes, pickles beets, apples, applesauce, grape juice and a variety of jams and jellies. However, I use the term 'we' rather loosely since the kids never did that much. I remember many times promising my mother I wouldn't eat any peaches or anything made with the tomatoes, therefore I shouldn't have to can them. It never worked and so as I skinned peaches and packed tomatoes I swore I would never, ever, ever can anything once I was an adult. (I swore the same thing about taking my kids to church, making them do chores, sewing their clothes, making my own bread, planting a garden, and painting a bedroom by myself--I've gone back on all of those ones too)

I did become an adult eventually. I got married, had a baby, took over custody of a neice, did elderly care in our home so I could stay with my kids, and got pregnant again. I was about 4 months pregnant when one day Lee's aunt showed up at my house with a tub of blackberries. She'd been at the wet pack cannery and they had extra blackberries they were selling for $5. She bought them and brought them to me because "I know you love to can." How the heck she knew I loved to can when I most certainly did NOT love to can is beyond me. I was far more annoyed than gracious and after she left I glared at those blackberries with absolute abhorance (anyone that knows the value of a 10 gallon tub of blackberries wants to slap me upside the head about now). But, I was cheap and couldn't let them go to waste so I first put several gallon bags of blackberries in my apartment sized freezer and then decided to make some jam. Christmas was a couple months away and I figured I could give the jam for neighbor gifts.

And the result was about 60 pints of the most beautiful jam I'd ever seen. I finished and just stared at what I had done. I made jam! I rescued 10 gallons of blackberries from spoiling and I preserved them until my family and freinds. I was mighty impressed with myself and a few months later was even MORE impressed with myself when my neighbors responded with astonished excitement when they got my jam instead of more candy. A switch was flipped, however, I lived in an apartment and soon had 2 little kids and a pre-teen, and a grandmother--so I didn't can again for several years. Then, we moved to Willard also known as the Famous Fruit HighWay. Whereas I felt like some kind of Martha Stewart when I lived in the city, up here I'm just like everyone else--they ALL can, but it's turned into a great resource for me in those ways as well.

I found a water bath canner at DI for $3. I planted beets and tomatoes, bought peaches and pears and apricots--I learned how to make mustard pickles. Now, some twenty years after my cursings about canning, I am so converted it's almost disgusting. I absolutly love to can. The feeling of accomplishment as I look at food I put up is almost hard to discribe. I think it ties back to an anciet female desire to create--and do I ever create! This year was actually a bit thinner than others because of time issues, but I still managed to can the following:

I only do jam every other year and this was an off year as I'm trying to use through the stuff in the freezer, and apples and grapes are yet to be dealt with--but most of the season is over for me. I finally figured out how to clean my stove (easy off, with a bowl placed over the sprayed burner to keep the fumes from knocking me out) and I had a great year for tomatoes. I had a couple friends ask me for tips when they decided to try their hand at canning for the first time in a few years, and that was a huge boon to me because they then get to feel that feeling of success, preservation, and accomplishment. I'm certainly no expert, and I've never yet attempted canning with a pressure cooker, but I'll get there and I'm sure I'll love it :-)

Now, I'm off to make an apricot cobbler--come on over this afternoon if you'd like some.
Posted by Josi at 7:43 AM

WooHoo! There's such a sense of satisfaction that comes from canning up a bunch of your own produce, and it's only lessened slightly when it's somebody else's produce.

Man, I wish I was YOUR neighbor! NOTHING is better than homemade jam...and peaches...and tomatoes...and...

I used to can peaches, applesauce and strawberries because that's what we had in our yard. But then I moved. Got nothing.

You go girl! I only love to can after I've started. I have a hard time making myself start, but once I do, I am always pleasantly surprised at how easy it really is.

I love the feeling of satisfaction also. As though I am truly contributing. I didn't can this year. Couldn't talk myself into it. I hate that. I can be pretty stubborn. My only excuse is that I was very busy!

You're inspiring! I've done a little canning here and there, but not much. Even so, I do love seeing the bottles lined up with food I created myself. Next year, I swear I'll do more.

My mom taught me how to can peaches this year, because my husband loves them. I absolutely HATE peaches, but canning actually was fun, and it was cool to see all the pretty bottles of fruit lined up. But wow, Josi, you're ambitious canning as much stuff as you do! That's amazing!

I love,love,love canning. I haven't done anythis year because of stuff that is going on. I told the kids that the green giant was going to have to do my canning this year, and I am sad about that.

Pressure cooker canning is not really that hard- just follow the instructions in the ball blue book and you will be just fine.

Oh, and my mother always said, "Never say Never because that is just what you will end up doing"

Okay Josi, now I am WAY depressed! How do you manage to do all that canning and write a book a year and edit for Precision and keep goats and chickens and . . . you are the true Martha :) Enjoy the fruits of your labors.

It always takes me a long time to get started, but once I get going and see all those beautiful jars sitting on the shelf, I get carried away and do as much as I can. It does taste so much better than anything we buy. I don't love the job so much, but I crave the results all year long.

Yeah, remember who Martha was? The one that complained no one helped her, that had better things to do than enjoy time at the Savior's feet. The whiney one. Yeah, that's me all right :-) I'm still so sad about your marinara sauce, Michele, honestly that would devastate me. I get upset enough about the jars that crack during the canning process.

That's amazing that you do this. I haven't even made and attempt. I "helped" my mom a lot growing up, but nothing but freezer jam on my own (and I usually mess that up somehow).

Oh my...what a haul! My hubby has been canning since before we got married and has yet to truly convert me. I love the results, but as an avoider of all things hot and sticky (I overheat easily) canning really isn't my thing.

If only it didn't need to be done in the summertime...

Are you serious--I want to come over--- when yummmy and CONGRATULATIONS.

Ooh, you ARE a domestic goddess!

I have never canned, nor have I ever had any food that had been jarred. The closest I've ever come is going to the dry pack cannery to pack DRY things (go figure) and to enjoy OTHER people's yummy fruit jam.

Well look at you! Does that mean you are all "growed" up now? It is funny the things we say we'll never do, yet we end up doing them. I must be more of a stinker, because I said that I would never plant a garden (my dad would get out the tractor to plow the most enormous garden you have ever seen! and we'd each have 12-14 rows that were all our own to take care of), and I yet to plant a garden. Maybe the trauma hasn't worn off yet from my childhood.
Sometimes though, the taste of fresh veggies from the garden sounds so good. Guess I'm not all "growed" up yet. Congratulations! :)

I loved this post because I also love to can! My mom cans everything and I didn't really love it until a few years ago. This year I was busy growing a baby so my garden was piddly but I did get about 35 quarts of green beans and 12 quarts of salsa. I was so sad that I couldn't do any peaches, but I had my baby right at the peak of the peach season. I love to look at all those beautiful jars (and eat all those yummy green beans)! :)