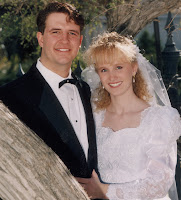 I saw this meme on Annette Lyon's blog and thought it was just perfect for Valentines day, so I stole it. We'll be celebrating 16 years in April--I can't believe it and yet having been here for each day of it, it's gone so fast.

1. Where did you and your husband meet? Weight Training class at Olympus High School. I was a Sophomore and he was a Senior. We were also in the same ward but between his work schedule and my rebellious streak and the fact that he was two years older, we didn't know each other beyond recognizing one another from church.

2. How long before you kissed? Um, about a month BEFORE we started dating. We'd been flirting for awhile and then one day in class I just leaned in and kissed him. He was not impressed, and I've been razed about my racy behavior ever since.

4. How long from the time you met until you were engaged? Two and a half years. After six months of dating he went on a mission. Within 12 hours of him coming home we were talking marriage, and we were engaged a month or so after that.

5. How did he propose? We went to a Japanese restaurant in downtown Salt Lake and had a private tatami room. He did all the sweet talk but explained he couldn't afford a ring yet, so he gave me one made of tinfoil and promised to replace it, but wondered if I would marry him anyway. I said yes, of course, and then a minute later the waitress brought our food, with a velvet box right there next to the Miso. Weird thing, we've never been back to that restaurant even though we love Japanese--I guess we just don't like down town Salt Lake.

6. Did he pick out the ring or did you? He did, then we went back and had some chips put on the side. It's simple, but perfect. 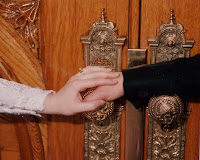 7. Do you still like the ring? the only thing I didn't like about it was that it was gold. I'm a silver girl but we couldn't afford a non-gold setting. A couple years ago I had it redone in white gold, but it's the exact same style as it was before.

8. Where was your wedding and reception? Married in the Salt Lake Temple, reception at our ward house--orange carpeted basketball court and all.

9. How many bridesmaids did you have, and who was your maid of honor? No bridesmaids or maid of honor. We were given $2500 by our parents for the wedding expenses, anything left over we could spend however we wanted to. I cut every corner possible and we left on our honeymoon with $1100 in our pockets--sweet.

10. What color were your bridesmaid dresses? See #9

11. What was your bouquet made of? Red roses--the $25 special at The Flower Patch

12. Who gave you away? Not applicable for a temple wedding. 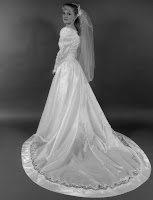 u cry during your wedding? Nope, I was ear to ear grins.

14. What style was your dress? I rented my dress from a lady in Pleasant Grove for $50. It was a shiny fabric with a full skirt and lacy detail. She let me keep it for 2 full weeks. I wouldn't change a thing about it. I was a size 3 when I got married and had a baby a year later--I'd have never fit into that dress again and I'd have never worn it again anyway. I know I'm an odd duck, but I honestly have never understood buying a wedding dress--I mean the guys don't by the tuxes, and wanna know why? Cause they know they will never wear it again, why spent all that $$ when it's a one day event? It simply does not make sense to me to spend soooo much money on a dress you will wear one time and then pay $75 to put in a sealed box--but I respect the fact that I'm the definite minority in this respect.

15. Was your wedding kiss sweet or sexy? It was in the temple, so it was sweet, but lingering sweet.

16. Who caught your bouquet? Nobody. I didn't throw it--are you kidding me? I spent $25 on that thing. I still have it in my trunk.

17. What flavor was your cake? Devil's food cake, with white frosting and black roses--my colors were red, white, and black. My YW president made it for me, and probably swore a couple times. I knew exactly what I wanted, but it was a hard thing to execute. Black icing is hard to make, and white frosting on a chocolate cake is a pain.

18. Did you smash the cake onto each other's faces or feed it to each other nicely? Totally smashed. It was up my nose, in my hair, all over his tux. But, see, it was a rented dress and a rented tux, so big deal :-) Fun memory.

19. What was "your song" that you danced to at your wedding? No dancing. But we always joke that our son is Turbo Lover by Judas Priest.

20. What did you serve your guests to eat? My aunts got together and made a buffet. I don't even know what was served other than my Aunt Sandy's chocolate chip cookies. I think there was punch and ham sandwich things. I didn't eat any of it, obviously.

21. What did your friends do to decorate your car? they use colored Elmer's glue--which was kind a nice cause it peeled right off. And they filled the car with balloons that took a few weeks to slowly fall out here and there--I left balloons all over Salt Lake (I know, bad for the environment and lazy as hell.) 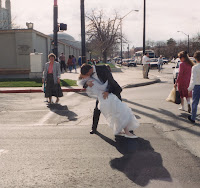 22. What was your favorite wedding gift? I have two of them--one was the $500 check we got from my mom's great aunt. That was awesome. The other was a framed and matted version of our wedding invitation. It's one of the few gifts I still have and I love it. I've done the same type of gift for other weddings and get great reviews on it. It's something I'd have never thought of doing myself, so I'm glad someone else thought of it.

23. What was the worst wedding gift you got? Dress Pant hangers. But we did use them once we figured out what they were for.

24. Where did you go on your honeymoon? To a bed and breakfast in Midway. We went shopping at the outlet stores and just spent two days . . . together. It was awesome.

25. Looking back, is there anything you would have changed about your wedding? I would have worn less eye makeup, had my hair done professionally, and hired a professional photographer. In our goal to make some money off this little union of ours, we went with a friend of my dad who really just wasn't very good. We did get all the negatives, which was nice, and the price was great ($400 for bridals, engagement, and outside the Temple) but it would have been worth getting someone really good since pictures are the one thing that lasts. I also probably wouldn't have done a reception at all, but instead done a nice wedding breakfast for the 70 people that really cared about me--leave out my parent's old neighbors and the guy in the ward that I can't remember his name and the people my dad works with. I'd have sent announcements to all those people, but kept the wedding celebration for just those people that really knew me or Lee.

Almost sixteen years later, we're still going strong. Marrying Lee was the best decision of my entire life, and every good thing since then can be tied back to him and all the goodness he's brought into my life. I'm grateful that he was blinded to my many flaws enough to stick around.

Cute post! It was fun to learn more about you and Lee. Oh and thanks for your help with Tyeson the other night. That was really nice of you. :)

I had the same wedding colors!

I really wish we had a professional photographer. My dad took our pictures and I feel bad about making him work on my wedding day, and honestly, the pictures did not come out very well. It makes me sad.

I would have also paid for someone to do my flowers. A family friend offered, and I found out the day before my wedding she had never worked with real flowers before, and you could tell!

How fun, Josi! The time really does go fast, doesn't it. Thanks for sharing your fun memories. :-)

I'm amazed at how many of us had the same wedding colors (great taste, obviously :D). Yay for another Midway honeymoon!

Love this post concept - what a great way learn about one of the most important events in the lives of those whose blogs we read!

This was a fun meme ... and I am glad you included pictures, too!

This is a way fun meme and I'm totally stealing it since I am out of things to write.

My best friend rented her dress and never regretted it. Sometimes I wish I had had that frame of mind, but my dress wasn't too expensive.

Wow! How similar are WE? I was married in SLC and then had a wedding breakfast in the Joseph Smith Memorial building (is that what it's called? I can't think) at (or near) the top with a gorgeous view of the temple. Only the people who were or would have been if they could have been in the sealing were there. No reception.

And I had forgotten until I read your post that my parents did the same thing about the money for the wedding! I guess that's one reason why we kept everything so low key, but really it suits our personalities, too.

I just realized that I didn't comment on your post! I read it yesterday and thought it was so cute. I had to copy it!

I loved reading about your wedding. You were a beautiful bride--and still are of course.

That was awesome Josi. I loved reading about you and Lee and how the heck you managed to snag a guy like him ;) That one is still a mystery, lol.

Very fun. Thanks for sharing!

Hey! Which bed and breakfast in Midway? Adam and I stayed at the Blue Boar Inn, a gift from my best friend.

Even though we just talked about your wedding the other day it was still so fun to read about all the details. I have all your pictures and they look good. Can't wait to show you. Anne

Great post, Josi. Lots of fun. And Devils Food Cake? Is that why it's crept into your future again?