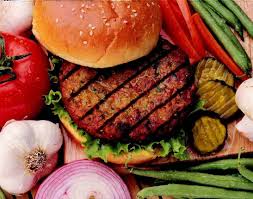 I remember the first time I heard the term "Veggie Burger". It was at a friend's house when I was about 11. Her parents were having a BBQ and in addition to the sizzling burgers was this light brown thing that looked like a combination between cardboard and dog food. I asked what it was and she said her cousin was a vegetarian and the weird thing on the grill was a Veggie burger.

"Basically it's a bunch of veggies and tofu all mushed together."

Um, can you say GROSS!

The GROSS label lasted until last summer, when I was at yet another BBQ. Some more vegetarians were there and they happened to have an extra veggie burger on the grill. I'm the kind of person that finds other people's quirks quite fascinating, and I love to ask about their jobs, the families they come from, how they met their husbands, what brand of toilet paper they like best--you know, the typical get-to-know-you-too-well kind of things. I love talking to vegetarians. It's fascinating to me that people can give up something like that by choice. There is no religious component (at least to those I have talked to) and most of them love the taste of meat--but they have a variety of reasons for not eating it. Most of them have issues in regard to the treatment of animals we later consume on pot-roast-Sunday, some of them have issues with the hormones used on meat production, and some have purely health related concerns which have taken this shift. As a person that can't go a day without serious sugar consumption and imagines a life without sugar to be paramount to going blind, it's amazing to me to see such dedication.

Anyway, so I started grilling (punny!) these vegetarian cousins of mine and they offered me a veggie burger, which I accepted. I then loaded it with so much ketchup and mustard that it was dripping all over the place. I didn't tell them, but I'm sure they guessed, that I expected cardboard. I was very wrong. In fact, it was delicious. The texture was just like hamburger, but there was no grease. It didn't taste at all like pureed green peppers or brown rice.

The next week I bought some veggie burgers at the grocery store and read up on the nutrition information. They are loaded with protein and fiber thanks to soy and veggies, they are low in calories and the fat content is almost non-existent. I grilled them up for my family--only one refuses to eat them, and I'm not surprised, she refuses most of my great ideas.

It's been abut 7 months since that first-time-veggie-burger-experience and since then I have consumed many a veggie burger and I have eaten exactly two actual hamburgers (I will never lose my love for Article Circle's cheapo hamburgers drenched in fry sauce, sigh) I've ordered veggie burgers at a variety of restaurants and am quite thrilled to have found that Burger King has had veggie burgers on the menu for quite some time. So has Chili's. I have a handy-dandy George Foreman grill which makes the cooking of a veggie burger about a 3 minute process. I defrost in the microwave for about 1 minute while the grill heats, then while the veggie burger cooks (heats through, really, since it's already cooked) I slice my tomatoes, tear off my lettuce, mayo and ketchup my whole wheat bun (or regular bread if I have no buns) and Voila, I have a high-protein, low-fat, very filling lunch or dinner.

So, if like me you had suspicions in regard to the whole veggie burger thing--rest assured that it's not so scary--in fact it's quite good. My favorite is the Boca Cheeseburger, but every other one I've had is also good. Happy snarfing.
Posted by Josi at 5:50 PM

I haven't had a veggie burger in years, and it wasn't very good. But I've heard that they are delicious now! I will have to try one.

My coworker is a non-meatatarian. We can't really call him a vegetarian because he doesn't really like vegetables. He eats a lot of cheese pizzas.

I met Annette yesterday, and she is delightful. Wish you could have been there!

I don't eat red meat (don't like the taste), so I may have to give the veggie burger a try. Sounds healthy at least, and I think hamburgers look good, just don't like the flavor.

Wow, I would never have thought that these would be good. Just the thought of even tasting them makes me want to gag. Maybe I will give in and try them.

I'm a very picky eater--between my taste buds and my stomach issues. I can't eat regular hamburger. It makes me sick for hours. I tried the Bocas and I loved them. My fav are the All American Flame Grilled variety.

I just hit their website and apparently they have Ground Crumbles (fake hamburger for casseroles). I've never seen that at my grocer but that would be cool to try.

Everyone at our house loves the Boca burgers -- especially the "flame broiled" version. We never make hamburgers at home any more. Which is fine with me. I never did figure out how how to cook them so they were done but not dried out. We don't like any pink in the middle. So the Boca burgers are a big hit!

I still have the GROSS label...maybe I should try one, too!

We're veggie burger fans at our house. They're really easy to do in the toaster over.

I didn't know BK had veggie burgers on the menu. We'll have to check it out next road trip.

Are they about the same price as regular ground up cow? Less? More?

Are they about the same price as a ground up cow? More? Less?

I think it's about $3.50 for a pack of 4 (this is at smiths). So pricier than ground cow, Mathew. I'll have to check at Costco next time I go and see if they have them cheaper in bulk. Karlene--I love the idea of crumble! I'll have to keep my eye out for that. And yes, the Flame Grilled is my favorite line.

Hm. I'll have to give these a try. I'm always trying to find low-fat, protein rich lunch options. Right now I eat a lot of pita pizzas which rock the party, but I'm ready for something new. Thaks!

This reminds me of the great veggie burger debacle at my house a few years back. I decided to try and be healthier, so I found a recipe and made our own veggie burgers. Not a good move on my part, and the kids will not let me forget it- they were the nastiest things I have ever tasted. The next week I tried some Boca burgers and we all loved them.

I am going sugar free here at the house for health reasons. I found 2 great cookbooks to help:
*The Feel Good cookbook by Jonell West Francis

I'm slightly tempted to give them a try now...

My mom introduced us to veggie burgers about....20 years ago? Yeah...let's just say that eating cardboard tasted better than those things did. So I have steered clear of those bad boys since then, until one day I was perusing in Costco partaking of all the delectible free samples when much to my wondering eye did appear, a miniature grill, with 8 tiny veggie burgeer's. (don't know why that song came to mind).

It's free...It's lunch time, I'm hungry...I'm not done shopping so my polish dog will have to wait until I'm done. What the heck? And let me say...it was TASTY! I bought a box of them. In fact I had totally forgotten about that box until I read this post. I'll have to dig around to see where they are at. Viva la Veggie.

My family became veggie when I was in high school. We were even featured in a big article in Vegetarian Times. (Aren't I cool?) My favorite are the Morningstar Farms Grillers. Have you tried those?

(I'm not veggie anymore, but we still don't eat much meat.)

I went through a vegetarian phase and absolutely loved these. You just made me want to go buy some. Thanks for the reminder!

I don't know if I could eat those on a long term basis. Some brands have got to be better than other too. What do you recommend. I'm willing to give it a try.

I am reading a PUBLISHED novel and have found tons mistakes like changing perspectives in the middle of a scene, loose sentences etc...and then today, I saw a sentence that ended with...?! Now isn't ?! against the law of all editing etiquette rules? Let me know. I'm curious as I am not affluent in all the correct way to edit. Thanks babe?!

I love veggie burgers! I like to top mine with salsa.

Someone else here mentioned the crumbles, and yes, if you can get them they're VERY good. I use them in tacos and spaghetti and other casseroles.

I've been a pesco-vegetarian (meaning I do eat fish) for going on eight years now. It's not that hard once you get used to it. It's like second nature now; the thought of eating meat or wanting meat doesn't even cross my mind anymore.