Rachelle Christensen's new book, Caller ID, is out and today is blasting the internet! Not only can you buy it at a discount on Amazon, but you get a whole slew of extras when you email your order confirmation to Rachelle. Go HERE to order it on Amazon and then go HERE to read up on the sweet extras she'll sending you--her email is there as well. Enjoy!

Wanna know more about the book? Here's the trailer 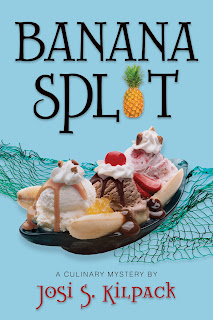 Every genre has a few 'rules' that go along with it. For example, in a Romance, the boy and girl end up in some kind of commitment at the end. In Horror, there's a good vs. evil dynamic in which the good will eventually prevail. As writers, we need to understand the rules of our genre so that we give our readers what they expect, and deserve, to get from our book.

Culinary Mysteries are a sub-genre of Cozy Mysteries, which has rules such as a low tolerance for violence and sex, and that the murder being solved usually happens off stage, meaning that the reader doesn't see it. Additionally, the reader usually knows as much as the sleuth does as the story progresses, though we expect and hope the reader figures it out just a few steps before our character does--readers like that and writers like their readers to be happy. Because of these rules, a typical cozy mystery is actually a story about figuring out another story.

With Banana Split--like my other books--I did not know the story behind the story when I got started. As I continued forward it kept changing until I found myself 75% of the way through the book and totally confused on what had happened. How had Noelani ended up in the ocean (Chapter One, I'm not spoiling anything) and why? I had three really solid suspects but I couldn't get all the clues Sadie had discovered to add up. So, I took a break from Banana Split and decided to actually write out the story behind the story--what it was Sadie needed to solve.

It was fascinating! Noelani is dead before Banana Split even starts, we only get to know her from the people who knew her, and they had varying opinions of who she was. Writing in her POV made her, as a character, so much clearer to me, so much more real. And, most importantly as I got near the end of her story, I figured out who killed her and why. By the time I finished the story behind the story, I knew how to finish the book. It was a rush to have that kind of insight and the rest of the story fell into place pretty quickly. As I finished Sadie's story, Noelani's story languished in my hard drive--it had served it's purpose.

I was going through my galleys (the typeset book which I do a final proofread on) when I realized that some of the events at the end of the book weren't lining up, I opened up the story behind the story again to make sure I was clear on what happened and how it happened. It helped with the proofreading a great deal, some of the details had been mixed up. By the time I finished that proofing, however, I wondered if readers would enjoy the story behind the story? Would they like to see what happened from Noelani's POV? Would they like an up close look at motivations and the chain of events that landed her in the ocean? I thought they might, and when I suggested it to my publisher, they agreed with me. We were able to quickly get it cleaned up and online, with a link and QR code included at the end of Banana Split that readers could use to take them to this secret chapter.

Doing this actually breaks one of those genre rules--I'm putting the mystery on stage. Cozy's generally end 'happy' but the story behind the story ends in a death, so it's a tragedy which also breaks rules. As far as I know, this hasn't been done before. Banana Split has been out for a few weeks and the feedback for the secret chapter has been positive so far--like me the readers are enjoying getting a moment in Noelani's head. A few people have posted the link in Facebook, however, and that gives me a rash since it completely gives away the plot for Banana Split. I'm hoping it's worth the risk. I hope if you read Banana Split you follow that link and let me know what you think. It's certainly a new idea and I'm curious to see what readers think.