What Does a Starred Review Mean? 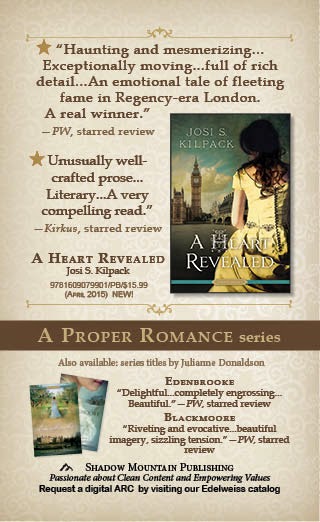 I'm not new to writing or traditional publishing, but with my newest book -A Heart Revealed - I am stepping into the national market for the first time. I've never had a book reviewed by the industry trade journals so I was anxious and eager and freaked-out and excited about how A Heart Revealed would be received by national critics.

Not every book submitted to publishing trade journals gets reviewed. The journals can be picky and, then, the reviews aren't guaranteed to be positive. In regard to Publishers Weekly (PW), there's concern that they tend to lean away from conservative fiction, which is what I write.  The next biggest player with the trade journals is Kirkus, who is known for not being as nice as PW. After PW and Kirkus is Booklist, Library Journal, and a handful of more regional journals whose reviews matter in regard to national exposure for good or bad.

Two months ago I learned that my book had been sent to all of these journals and my publisher expected reviews to start coming in mid-February. I asked my publicist to read any reviews before sending them to me because a bad review can set me back for weeks. I would have expected that poor reviews would get easier as time marched forward in my writing career, but that has not been the case for me. I’ve published more than twenty novels over the last fifteen years, but rather innocuous comments like "Kilpack's writing has improved since the first book in this series" or "This isn't the kind of book you'll skip dinner for" on Goodreads can create a pit in my stomach that is as illogical as it is real, no matter how many good reviews I read to remedy my reaction to the negative. So I avoid reading reviews. Unless someone sends me the link with an indication that it's positive, I will rarely dare to read them. My ego has become fragile, go figure.

On Tuesday, February 17th, my publicist sent me the link to the recently published PW review, not only a review but a starred review! Because she promised the review would not send me into a downward spiral, I was able to read it and WOW, it was so complimentary. My whole body tingled in response to the few sentences of praise that followed the basic retelling of the storyline (standard practice.) I could not have been more thrilled and immediately went online to learn the difference between a starred review and a regular review.

PW does about 10,000 reviews a year. Of those, about 500 will get starred reviews which means "A book of outstanding quality." Another percentage will get a "Blue Title" which means that the book didn't get a star, but it does have unusual commercial appeal. A starred review influences sales—especially by retailers and libraries—and by way of validation, it was HUGE! To-the-moon-my-cheeks-hurt-from-smiling HUGE! You can read the full review HERE.

That was Tuesday. On Wednesday, I received another email from my publicist with her encouragement to read the review for A Heart Revealed from Kirkus. Two national trade journals in two days? Not only that, Kirkus gave A Heart Revealed a starred review as well. Kirkus does 8,000 to 10,000 reviews a year, and approximately 10% of those reviews are starred. A Kirkus star is "awarded to books of exceptional merit." Additionally, recipients of a Kirkus star are automatically eligible for the Kirkus Prize, a $50,000 prize awarded to the winning books published and starred in the given year. I'm not holding my breath for a Kirkus Prize, but I won't give up hope either :-) You can read the Kirkus review HERE.

And so, what does this mean for me and my book? It means more industry people will buy it. It means more libraries will stock it and more readers will read it because it will be available. It means that I’m entering the national market with a couple of important reccomendations next to my book title. It doesn’t mean the book will be bestseller. It doesn’t mean that readers will enjoy it as much as the reviewers did, and it doesn’t mean that books without starred reviews aren’t excellent, but, dang, it’s a really great start for this new phase of my career. I'm so grateful to my publisher, Shadow Mountain, for having enough confidence in this story to send it off with the hopes that we would get this kind of feedback. I am so blessed to be part of such an exceptional team.

To wrap this up - I'm in a great place right now and I am trying hard to maximize it to the height of it's potential. Publishing is full of hills and valleys, the key is to soak up the sun when you reach the peaks. I plan to!

A Heart Revealed is available for pre-order through deseretbook.com, Amazon, and Barnes & Noble