As Wide as The Sky Release and Book Launch

I am REALLY excited about the release of my first national market women's fiction novel, As Wide as the Sky, which will be released on July 31st from Kensington Books. This will also be the first novel I have done under a pen name--Jessica Pack. The reason for the pen name is to differentiate this novel from my other novels, as this one has different content. While I hope many current fans of Josi S. Kilpack novels will also enjoy As Wide As the Sky, I'm hoping to build a new audience too :-) In light of getting the word out about Jessica Pack and As Wide as the Sky, I'm running a contest for five autographed copies. Multiple entries via this link: a Rafflecopter giveaway.

There will be a presentation starting at 7:00 as well as refreshments, a prize drawing, and a book signing. Photos will be posted on the Facebook event page during and after the event. (you can join the event via the rafflecopter give away above--might as well, right? :-)  )

Right now the two names I'm writing under are overlapping in regard to how I'm putting the word out, but I'll be separating over time. If you're interested in works like As Wide as the Sky, you'll want to make sure you're following Jessica Pack.

Thank you so much--Happy reading!
Posted by Josi at 7:04 AM No comments:

Scavenger Hunts are always fun; but scavenger hunts involving BOOKS? That's really fun. I'm a sponsor this year for the Night Owl Romance "Books and Tea Party" Scavenger Hunt. The event runs from February 15th - March 8th and will include lots of opportunities to learn about some great new books, as well as the chance to win the grand prize: a $100 Amazon gift card.

Click below to learn more about the event, and enter to win! 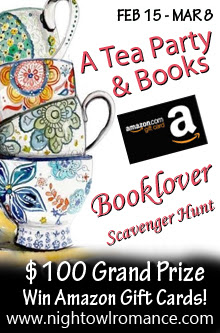