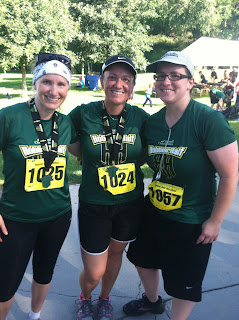 On July 7th I ran my 5th half marathon. Wow, that is surprising to even right that. Five years ago I hated running and yet here I am. Go figure.

I didn't train very well, my longest run was 9 1/2 miles and it about killed me. Spring is always crazy busy for me and this year had a deadline and my oldest daughter graduating high school thrown into the nutcase. It was intense and therefore I didn't get serious about my training until about four weeks before the race. The schedule I WANT to stick to, involves moderate runs 3 days a week--one of them an interval run--and then a long run. I ran twice a week and my long runs never got that long. I've put the weight I lost back on (yeah aging metabolism!) and, as I said, things were just crazy. Having run through the winter, running in the heat feels out of the question for me so it required getting out the door by 6:00 to get my runs in and that's hard and blah, blah, blah. Anyway, I didn't train well.

The upside of not training well is that I wasn't going to beat any times. I was just running it, and proving to myself that I could. And that was nice. Packet pick up was smooth the afternoon before, at Trapnell Orthodontics in Springville, though parking was limited. The shirts were awesome. After we got our stuff, I went to dinner with my sister, Crystal, her sister-in-law, Jenny, and my friend Marion Jensen. We were all signed up and carb loadiing and since we were in Utah county we hit the buffet at Brick Oven. I think it was a good choice and we got to talk running and get pumped up. My husband Lee had come with me and we were set up at a hotel, so after dinner I went back to the hotel and realized how much stuff I'd forgotten--my iPod, my visor, my jacket, my morning protein shake, and my chapstick. Good thing there was a Wal-Mart close by. We did some shopping and I took my Tylenol PM so that I'd for sure get some sleep.

At 4:45, I was up and raring to go. By 5:15 I was at the pick-up spot waiting for Crystal and Jenny. There were port-a-potties but since it was dark you couldn't see well--and the potty I chose was disgusting, which was awesome to figure out in the dark. Anyway, I finally met up with Crystal and Jenny and we got on the bus, only to find that Marion had beat us onto the same bus. He had a great seat. We were at the back with the cast of Jersey Shore who succeeded in completely annoying us through the 20 minute drive to the starting point.

I had heard this was a good course and mostly downhill, but was pleasantly surprised to realize that while it was overall a downhill course, it had rolling hills and texture to the course. We were on the highway for a little while, but eventually ended up on a running trail. The canyon breeze was perfect. Since neither my sister or myself were going for a time, we ran together which was so much fun. We can talk about anything and everything and so we kept up the chatter throughout the whole race. They had GU packets, but since they hadn't told us they were going to have it, we'd both brought our own boosts--mine was a 5 hour energy which was nice and hot by the time I drank it at mile 8. Not yummy.

It didn't get hot until the last mile and a half--but it was really hot and the heat just sucks the energy right out of me. They had people positioned with hoses, which was awesome, but that last mile was rough. Crystal and I walk-ran it but then were able to run the final quarter mile and into the finish line which we crossed at the same time. We came in at 2:21, which is my second fastest time which I liked very much. It seemed to prove that even though I haven't been training as I'd like to, I have built up my foundation well. I liked that validation a lot.

The after-run snacks were awesome. They had Creamies and Gatorade and water right there at the finish, and Magleby's had brought their awesome french toast for all the runners as well. There were tickets for drawings, or so they said, but though we were there for 45 minutes, they never drew a ticket--instead they made people do dance competions and things. I HATE that kind of stuff and it annoyed me enough that I finally gave my ticket to someone else and decided to go back to the hotel where Lee was waiting for me.

My recovery was great, I was barely even sore the next day, and I wasn't completely wiped out energy-wise either--another testament to the foundation I've been able to build. This was the second run I've done with my Altra shoes and I just love them. I don't get sore arches or knees or toes with them and I love that.

So, it was a great race with great company and I felt great afterwards. And yet, despite all of that, I'm really hating running right now. I've decided that I actually put on weight when I'm training--and no, it's not all muscle--and I'm tired of that. I also hate getting up so blasted early and I'm just not enjoying it like I did last year or the year before. I'm frustrated by that and not sure what to do. I can give it up, but then what do I do for exercise? Even if it isn't helping with weight loss, it's good cardio. I have a class I do in the mornings now and then, but I have a hard time doing that regularly and I don't love it either. I have one more 1/2 I'm signed up for, Top of Utah, next month and I'll run that and see what I think but I'm not sure I want to keep running like I have been this last year. I'm not sure it's as enjoyable as it once was. Maybe I'm in a phase--I hope so, because I've worked hard to get where I am. It's helped to have running partners that give me a reason to get out there and help take my mind of how bad I hate those runs :-)

Anyway, all in a it was a very good race and I'm glad I did it. Assuming I am still running next year, I'd like to run it again :-)
Posted by Josi at 11:05 PM No comments: