This morning Julie and I had lunch with Heather Horrocks, author of How To Stuff a Wild Zucchini. She and her sister had come down to St. George for a book signing and took us to breakfast, which was delicious. Sit down meals definitely beat Taco Bell. It was fun to chat with her and hear the incredible range of things she's written and plans to write. AND Josi forgot her camera. She's really awesome that way. It was very fun though and I'm excited to see where she'll go from here.

Then we picked up Julie's daughter and were ready to head toward Cedar City when I realized I didn't have my credit card. Not a good moment. The last place I'd used it was Outback Steakhouse the night before, so we held our breath and headed that direction, hoping some prep cook was already there. They were. I asked about my card, and they had it but asked for ID to verify I was really Josi. That was awesome and EXACTLY what they should have done. I'm so writing an e-mail to tell them how awesome their manager was. 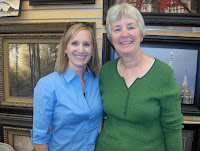 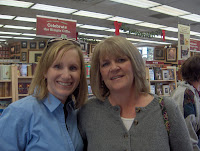 Then we headed for Cedar City, got there early and hit Wal-mart to replace Julie's brush I'd taken out of her bag and left at Janette's. Hey, wait, did I end up buying it or did Julie pay for it? I better check with her. Then we hit Sally Beauty Supply--they have the best bobby pins ever and the last two times I've gone in they were sold out. 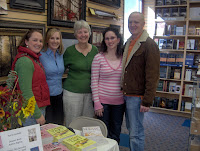 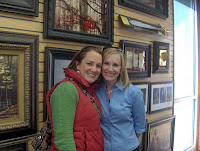 Then we went to Cedar City. It was a Hannah Montana day. Vicki C. and Ali C. had come down from Milford to see New Moon and stopped by the store. Awesome to see them for the first time in years--AND I didn't get a picture. I suck. Not long after they left, Deann, my sister-in-law Crystal's mom came in. She is so much fun; spunky, encouraging and just so dang positive. The only draw back is that she has cuter hair than me. Dangit! But I got over it :-) and was so glad to see her. Right behind Deann was my Aunt Pam who I haven't seen for quite some time. My sister Crystal showed up a little while later, and then my brother Sam and his wife Whitney. It was awesome! In between all the great family reunion I sold a bunch of a books and THEN Lee Modesitt showed up with gifts for Julie; five copies of his books in Swedish! Lee has been a great friend and mentor to Julie for quite some time and it was awesome that he took the time to come and see her. 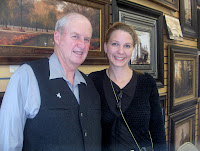 When the signing was over, Julie, her daughter and my fam got to go to lunch--it was a perfect ending to a great day and a really awesome book tour. After we left Cedar City, we headed for Julie's house in Oak City and managed to cram in yet even more topics of discussion. We reached Oak City around 6:30, unloaded, lost the keys, found the keys, gave final goodbye hugs and I headed for Salt Lake. I met up with my family at the rental car return center, and thier eyes about bugged out of their heads when they saw the miles. I was hiding in my own car at this time, while my husband turned it in. for whatever reason I was certain I was going to get in trouble even though we had unlimited miles. But they were very nice to Lee and we left without being told about some fine print that was going to cost me $500.00.

It was GREAT to hug my kids, kiss my husband and just be home. I love it here!
Posted by Josi at 4:28 PM

Welcome home! Glad you had such an awesome trip!

Hooray! You're home! After you get your family-fix, let's do indian! (Are you sick to death of me yet?)

It sounds like a great tour and I'm very happy for you both. =] (Sally's is the best place for bobby pins and hair clippies.)

Glad you got home safe!!!