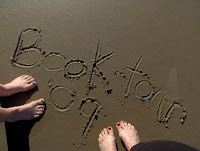 Sunday was awesome. We slept in, the hotel had yummy waffles as part of their continental breakfast and we were just a few miles away from Newport beach. The weather could not have been more beautiful AND we found a parking space. 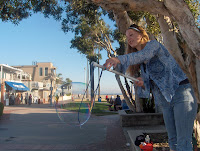 While walking the beach we found a man blowing bubbles—huge bubbles like we’d never seen before. We stopped and watched, then moved on, and then passed him again. This time, however, he was telling someone how he sold the homemade wands for $5. We were all over it. While he went to the car to get the wands, Julie stepped up to take his place. She’s amazing and had it figured out within minutes. 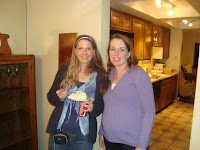 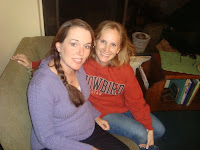 After Newport we headed for Huntington Beach, where the beautiful and amazing Melanie J. had offered us a place to stay. First of all, the area of Huntington Beach is incredible. It seems impossible, but it felt like a small town. Everything is within walking distance; the beach is only a couple blocks from her house. It was instantly welcoming and comfortable. Anyone who knows Melanie online knows she is funny and smart and sassy all at once; she’s even better in person. She’s got darling kids, and a wonderful husband, Kenny, who actually made Julie and I christmas ornaments to commemorate our trip (photo to follow). That night we went to Kenny’s parent’s house for dinner. Wow. The food was the bomb, but his parents also have a boat dock behind their house. We got the ‘backyard’ tour of the houses along the harbor. I’d never seen anything like it. We got to meet several members of Kenny’s family as well as Melanie’s brother, his girlfriend and some neighbors. You would think meeting that many strangers would be overwhelming, but it honestly felt like we’d known them for years. They were so kind, so comfortable and did I mention the food was awesome?

On the way home Kenny dropped us three girls off at the beach so we could walk along it in the dark. It was so surreal to be in such a place with such women. We returned home and, of course, talked for hours before finally going to bed. It could not have been a more perfect Sunday for us. We really needed the break and couldn’t have choreographed a better one. Monday morning we (Julie, Melanie, Melanie’s son, and I) went to breakfast at a restaurant at the pier before Julie and I headed to our first signing at Fountain Valley’s store, The Bookport. We met Glen and Sue the owners and were able to see Melanie one last time (but I totally forgot to take pictures, we didn't get one with the three of us which makes me want to cry) 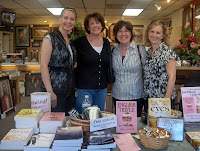 After Fountain Valley we spent 2 more hours in LA traffic to get to our final California stop, The Book Castle in Newhall. Wow. They had a HUGE poster on the front door talking about signing and had mailed out postcards to their customers. We sold a bunch of books and laughed for two full hours. The employees were awesome, the store owner, Heather, was awesome, the store itself was cute and the customers were so nice, so personable. It was a perfect way to end our time in California. 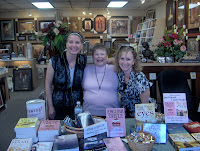 We had realized over the weekend that when we routed our trip, we had made a mistake. I don’t know why, but amid our original mapquesting, mapquest had sent us on the 40 into Arizona. This required us to up to the forty, then over, then back down to the 10 which was a straight shot into Phoenix. We’d mentioned this to a couple people and they were surprised, pointing out that going our way added four hours to the drive. The problem was we’d gotten our hotel rooms at a great price which did not allow cancellation and we were supposed to stay in Lake Havesu that night. We talked, debated, called for help, and eventually chose to ditch out on the hotel room in favor of saving four hours. It’s not an easy choice to make when everything is so budgeted and specific, but we’d have spent two tanks of gas and priceless time sticking to our schedule and felt it would be silly to do so. Instead, we left Newhall at 4:00 and drove straight through to Mesa—calling our friend Janette Rallison (who we were planning to stay with on Tuesday night) to see if we could stay Monday as well. We arrived around 1:00 in the morning, and went straight to bed. Slept like a couple rocks.

No we find ourselves at Tuesday of week two. We have a signing at the Glendale Deseret Book from 12:30 to 2:00, then a signing at the Mesa Seagull 4:30-6:00 and a book group tonight. Before all that, we’ve got laundry in desperate need of being done and could really use a shower.

Whoa, those were some intense conversations!

I'm so glad you got to hang out with Melanie J. I just love the heck out of that girl. (And she's GORGEOUS too!)

Loved that picture of your feet in the sand. How cool is that?

That's awesome that Janette let you stay longer with her. =]

I bet it was great to take a break and have some fun in the middle of all that driving and craziness. Love the bubbles!

So, yeah, I think going on a book tour with someone is the best way to go!

I'm so glad you had fun and that Newhall turned out to be such a good stop for you! And of course, I'm really glad you guys both came.

Josi, I know I am a pain but could you trip on over to my blog and let me know when your signing is in Cedar City, Where, and at what time? Thanks..see you there!!!