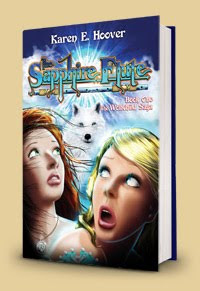 First, I must start out with five reasons I think Karen Hoover is awesome--these are listed in no particular order:

1--She's a certified massage therapist and OFFERS to give me neck massage when we're together. I honestly think she can 'read' my tension and if she weren't so nice she would force me to sit, but she is nice so she doesn't force me, just talks me into it. It's a really hard sell :-)
2--Her sons are biological brothers who Karen fostered and then adopted SPECIFICALLY because she and her husband wanted to a) have children b) be part of keeping siblings together. Not only did she build her own family, but she preserved theirs. I can hardly think about it without getting teary.
3--Karen looks AWESOME in hats. I have definite hattitude envy when I'm around her.
4--If I could summarize Karen in three words it would be "Dancin' in the Rain." Since I've known Karen she's had a lot of thunderstorms come her way, some complete with tornado sirens and flash flood warnings. She has managed to build herself a very sturdy canoe and will be the first to tell you that thunderstorms suck, but they happen and must be forded. She's an excellent forder and just keeps singin' when the storms wash through.
5--Karen is a fabulous writer. I was lucky enough to read one of the first drafts of The Sapphire flute a few years ago. I'm a critical reviewer, but Karen weighed out every word of advice I gave her and pushed forward. She is not only talented, but she is passionate, not only about her writing, but about other people's writing too.  She is classy, optimistic, and after years of writing, she is now a Novelist!

In lieu of a book review, I conducted an interview with one of Karen Hoover's new fans, my fifteen year old daughter we refer to on this blog as Jeanie. By virtue of being my daughter, Jeanie is not your average 15 year old reader. We discuss plot holes, character development and the use of foreshadowing as normal conversation when discussing books. She doesn't like everything she reads and is pretty darn articulate--especially compared to her mother twenty years ago. So, her opinion is one you can trust:

1) Can you summarize for us the story told in The Sapphire Flute?

Kayla's life if flying high as she is finally being recognized for who she is and her talents. Striving to be important, Kayla excels in her flutist abilities while hiding her genealogy as everybody comes to adore her. The king has recognized her skill and her values, so he has assigned her a special role. Guardian of the Sapphire Flute.
Meanwhile, Ember is lost in her feelings. Her stepfather's health has declined so far that he is racked with coughs. Ember's relationship with her mom isn't so great either and whenever Ember asks her mom about her real father she clams up. Odd dreams, lonely nights, and a confusing future dampen her life too. That's when her fate starts to look up.
Both girls are destined to fight the evil forces of C'Tan with the help of magic but have no idea who each other are. In this upbeat book their lives take huge turns together and are always in sync, despite the miles in between.


2) Which character did you like, or relate to, the most? Why?

I could relate to Kayla the best because I share the same love of music and I love how she expresses it.


3) You've read a lot of fantasy books, how did The Sapphire Flute compare?

Pretty good, it was always moving so at times it seemed breathless but it sure did keep you turning the pages.

4) Who would you recommend this book to?

Anyone who is a sucker for magic this book uses it at its best, giving magic its different colors and characters.

5) Anything else you would like to say about The Sapphire Flute?

The characters were fun to follow as they grew in the good times and bad. When I first saw the cover I thought it was a book for younger kids. I also thought the cover was kind of busy, but after I read it it made more sense why it was the way it was. It was a really great book and I'm looking forward to the rest of the series.

So, there you have it--a first hand account of The Sapphire Flute. Happy Reading!
Posted by Josi at 6:00 AM

I can't wait to read this book!

Excellent review Josi & daughter! (I had no idea Karen about those things you mentined about Karen. She is awesome!)

Thank you, Josi! That was a wonderfully unique approach to an interview. And thanks for all the nice things you said about me. :) You totally rock!

I happen to agree that Karen is about the coolest thing walkin'!

I don't know what I want more after reading this post, to read that book or to find a way to convince Karen to be my friend. Both sound fabulous!

Excellent review of Karen and her book. I loved reading your daughters viewpoint.

I also think The Sapphire Flute is a great fantasy book. My review on the book is up tomorrow. I hope that mine is just as wonderful as yours was today.

All of you guys totally rock! You've just put a huge smile on my face for the day and made me feel so very loved.

Kimberly, I'd be honored to be your friend! :) I've admired you and your writing from afar for several years.

I just can't say thank you enough, Josi, and to all of you for the kind words. I think you guys are amazing!

Josi, I always knew you were cool but you just got cooler! With a daughter like that, you're the rockinest. ;)

I happen to agree about Karen. She's pretty dang wonderful and I love her tons and tons. Congrats to her on the release of her debut novel!

Different kind of review. I liked it. Thanks for posting it.

a) I love getting to hear some 'behind the scenes' stuff of authors.
b) fabulous review by your daughter!
c) totally wanna go get this book now!

I am very excited to read this book soon, I've heard lots of good stuff about it! I'm an aspiring author, and I do hope to get my break in the literary world with my own novels. I want to wish Karen Hoover all the best of luck, and please, everyone drop by anytime! ^_^