Parable of the Cedar Chest 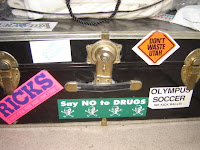 I don't actually know if this qualifies as a parable, but I like the idea of writing my own so I'm going to go with it. Also, I've decided to name my children for the blog--#2 was slightly offended at her nickname here so I've dug deep and gotten creative.

As a teenager I wanted a cedar chest. I had a few friends that had them and I thought they were so cool. Being one of 9 kids meant I didn't have much privacy and I was always scouting out little places I could keep things safe. At 14 I got a trunk for Christmas. It's plywood, with sheet metal overlay and fasteners. It was not a cedar chest, but I loved it and covered it with bumper stickers (including the one that says "Olympus Soccer: We Kick Balls" I was a classy kid, what can I say?) It had a key and it was my own little space. Over the years I stored journals, letters from my hubby, and other mementos. When I got married, it was one of two items that came with me (the other was a rocking horse my uncle made for me as a child--I still have that one too). I added my wedding veil, the cards that came with my wedding gifts, and some baseball cards I hoped to one day make a million dollars off of. I loved my trunk and only the most valuable things went into it. 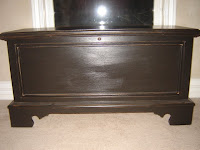 For my 4th wedding anniversary my husband bought me a real cedar chest. The old trunk went into the closet and the new chest became a treasured piece of furniture, quickly doing it's job of preserving the most important things I wanted to hold on to. It was oak--which I didn't love--and so I refinished it in black a year or so ago, sanding the edges to give it an antiqued look.

Last year, I gave Jeanie a cedar chest for Christmas. We bought it used (new ones are several hundred dollars) and we refinished it after the holidays. For me, this was a powerful gift to give. Jeanie will be eighteen in only 4 years which seems like an incredibly short period of time. I wanted to give her this option of saving some of her youth while also preparing for her future which was coming up quickly. She was very positive about it and I just felt like I'd done a very good thing--giving a gift that will last a lifetime.

Last month, we bought a cedar chest at a charity auction. I sanded it down and was getting ready to paint it for Lou-Lou--excited to once again give a gift that, in my mind, is almost priceless. However, Lou-Lou found my Christmas list and read it--pronouncing bluntly that she didn't want a stupid cedar chest. She wants nail stuff, and CD's, not furniture. I was very annoyed at this--not only because I'd already invested in this gift but because it's a GIFT. That means I choose it, not her. I felt she was being very bratty about it, and yes, my feelings were hurt.

Amid all this I remembered the new knobs I'd bought for Jeanie's cedar chest last year and had never put on. So, I went and put them on only to find that after owning the chest for a year, she had put absolutely nothing inside it.

Then my husband said he thought we ought to sell the cedar chest and get Lou-Lou something she really wants.

Argggg! I was getting it from all sides and reviewed my options. In a rare moment of wisdom, I chose a route I don't often use. I decided to try to teach something, rather than pout.

Tonight, I invited Jeanie and Lou-Lou into my room. I told them how I'd wanted a cedar chest as a child and why it was improtant to them. I told them about my trunk, and then I opened my cedar chest and showed them the things I keep inside. Signed copies of my books that I will one day give to my children, copies of my books I sign to myself when they arrive. A newspaper from the olympics, the blessing dresses of my children that I will give them when they have kids of thier own, recipe books I've collected for my daughters, a pillow with a copy of my engagement picture on it, an extra wedding album in case something happens to the one I have, a time capsul Jeanie made in Kindergarten, a box full of mother's day cards and little notes the kids have given me over the years, the blown glass flower that topped my wedding cake, a blanket my freind quilted when Little Man was born. After we went through all these things I explained to them that even if I lost it all, I'd have the memories of these moments and they are the most powerful thing, but, I love having these tangible reminders. I love to touch the letters they've given me, I love knowing there is a safe place for my treasures. I explained that my giving them cedar chests is so that they can also find those treasures and save them for their futures. I then said that I realized it might be an old fashioned thing, that if they don't want the cedar chests we can sell them, they can keep the money and spend it on something else, but that I believed that the chests were something that twenty years from now, when iPods and CDs were a thing of the distant past, they would remember that their mother gave them a cedar chest. That one day they might pass them on to their children, and that when they left our home, they would take this little peice of it with them.

Lou-Lou promptly reported she wanted her cedar chest. Jeanie asked if she could have her signed books to put in her own. And me, well, I'm a little tender hearted at having forgone my usual bullying style of parenting and having this moment with my girls who are so precious to me, and are growing faster then I can keep up. Now and then I do a really good thing--creating these two wonderful daughters were two of my very best.
Posted by Josi at 9:43 PM

Josi,
I love the teaching in this! I'd call it a parable too. My mom always wanted my Dad to make cedar chests for us girls, but he always said he couldn't do it. Then, when the oldest grandaughter (who is only 2 years younger than me) was graduating from HS, she asked grandpa to make her a cedar chest, to which he replied 'of course'. My mom was very upset with him over this one. She kind of chewed him out that night, and the next morning dad came to the four of us and told us he would make us the chests. It turned out to be a strange order, but all 4 of us have hand made chests from our dad. All the grandaughters get one when the graduate from HS now. I think he's up to 15 made so far.

It's a very special thing to have of my own, more so because my dad made it for me. But I agree about the imporance of having your own special place to keep your special things!

What a cool moment for you and your girls! (And what a great mom you are!)

I love your parable. It makes me want to clear out the blankets I store in my cedar chest and fill it with my special stuff.

And what a special way to share the experience with your girls. You get an A+ for that one!

This was beautiful. I loved it and totally related. It was a tradition in my family to get a cedar chest for graduation.

I love mine. It's very old fashioned looking. My only problem is that my son lost the key to it. So the things inside will stay inside until I can get them out! =)

When the dust settled after my mom's death. House sold and all the memories hidden, sold and or given to the precious person who helped make the memory. I ended up with Mom's Cedar Chest. It kept all the important papers from Mom's life. Some of the papers are a novel waitin to be written but I ended up with her Cedar Chest I fought against it because of all the memories inside of it. We as siblings got together and divided the memories up and I ended up with the Cedar Chest. I won't trade it for anything but as it sits in my living room. It brings back memories that could have been forgotten. If one of my children wants it; it is theirs. Hopefully the memories that lay inside the empty chest, as it waits for more will bring the comfort it has to me.

Thank you for sharing this great, inspirational experience. I always loved going through my Mom's cedar chest with her telling be about everything. Sadly, I did not get a cedar chest growing up but now have my grandmother's which is very worn but very special to me. I just got it a month ago and haven't put anything in it yet. I have to clear it out first. Seems my Mom got the idea to fill it full of "stuff" I might want. I've found a couple of treasures so far.

Beautiful post Josi! Kudos for making it a wonderful teaching moment. You're an awesome mom.

I never received a cedar chest. It's funny. My mom has one and we always loved it when she'd open it up and we got to look inside. But, none of my sisters nor myself got a cedar chest. I hadn't really thought about it before. It would have been nice.

I love this story and the sentiment behind it. I have my dad's old black travel trunk and it's definitely one of my favorite things.

O.k I'm blog stalking again. That is some powerful, tender stuff. I love, love, love your blog. What an awesome teacher and mother you are. I could have used your motherly advice when I was raising four teenage daughters. Yes especially Crystal, who by the way turned out pretty awesome. Your daughters are so lucky and blessed to have such a hands on mom. Keep up the good work.

Awww, that got me all misty! You're a fantastic mom.

I have always wanted a cedar chest--and now I'm feeling all sorry for myself because I'm 30 years old (soon to be 31, I'm sure aware ;) and have alllll my cards and sentimental treasures in misc. shoe boxes who know where--maybe I'll buy myself one--take back the control, thats the ticket!!

I just LOVED this post! I pictured it in my head so perfectly thanks for sharing it!!

Missed you this weekend-see you in 2 more?!

Cool Mom! You are so lucky to have girls.

I loved that. What a great idea. I have one with baby blankets and a few old clothes from my mother. But I never really thought of getting one for my girls.

And do you know what the male equivalent of the hope chest is? A tool kit. (Donna at http://donnasjourney.moorhouseacademy.org/ told me that one.)

What a powerful and moving post. What a great parable.

One of these days I, too, want a cedar chest.

I enjoyed reading this story, and I'm glad the you could help the girls understand why the chest is so important.

Posts like these are why I'm passing on a blog award to you! Come by my blog and see your name in pixels.