Summer Reading Thing 2007: A Bend in the Road 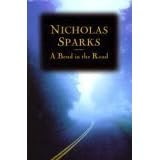 I've heard about Nicholas Sparks for years, and I own two of his books but this is the first one I've ever read. I chose it for my Summer Reading Thing 2007 All in all, I liked A Bend in Road, but I don't know if I liked it enough to read anything else of his. This sounds really weird, since I said I would probably read another Janet Evanovich book even though it was crude and not terribly well written. Sparks, in contrast, is quite clean (though there is premarital sex and some mild swearing) and beautifully well written. However, it was a sloooooooooow read, and I just don't like slow reads. I had to make myself finish this because it moved so slowly that I'd forget all about the plot, in fact I didn't think the plot itself was fully introduced until after the half way point in the story. Again, the writing was beautiful, he's mastered the use of words, but I just didn't care enough. Sparks also jumps in and out of POV constantly, and I really really don't like that. I don't mind spending a story in the heads of other people, but three people in one chapter is over the top and without any solid breaks to alert me. I have never liked that and as I've learned more about POV I like it even less. I think the book would have moved faster and I'd have been more forgiving if he'd been a bit more loyal to the heads he was in.

The best part of the book was the ending. For a book that seemed pretty straight forward and predictable, it suddenly changed all together. He made some brilliant twists that I certainly didn't see coming (though I figured them out before he flat out told us--which made me feel smart) and my attention was riveted as the final scenes worked themselves out. I was very impressed with that, and, as I've said, his overall writing. But I struggle with books that don't read quickly. Perhaps I'm a lazy reader, perhaps I'm just not literary enough to have the kind of patience I need to fully appreciate a work like this--I don't know.

I'm very interested in what other people have thought about Sparks and if his other books are worth reading.
Posted by Josi at 10:14 PM

I'm interested as well. He's one of those authors I keep meaning to get around to.

I started reading Nicholas Sparks when his first novel, The Notebook, was released. I really loved the sweetness of the story. I've probably read a half-dozen more of his books--some I liked more than others. More recently I read The Wedding--a somewhat slow read as well, but by the end he'd totally won me over. I won't say more because I don't want to give anything away.

I must like Sparks because I keep reading his books.

I don't care of Nicholas Sparks work for all the reasons you mentioned. So I own none of his book. It was interesting to find someone having the same reaction to his writing as I do.

I read the notebook and enjoyed the story. I agree with you that he uses language beautifully, but I also like a story that moves a little faster. I've said I enjoyed the story, but I haven't picked up anything else of his yet. I also keep picking up the movie, but haven't felt any real push to watch it. Guess I figure that might be slow too.

My sisters and some friends have tried to get me to read some of his books, but I just can't get into them. And once I start a book I normally finish it, not this author ... yet.

Sparks is on my to read list--but I'm with you on the POV thing. Nothing drives me up the wall faster than POV switches. (Well there are a few other things, I suppose)

I've read several NS books. I usually enjoy them and am not bothered by the POV thing. However, I don't like to sob at the end of a book, and with most of his, that is what happens-I'm whimpy that way. So I am not quick to pick them up, although, I am always entertained while reading them. I usually ask my mom to tell me a little about them and then decide.

So, I'm not alone in my current opinions--but it might be worth giving him another shot. Good to know! Thanks for the feedback, gals :-)