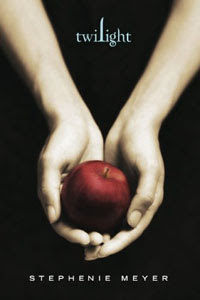 I bought this book a month ago, and my 13 year old hijacked it, read it in two days, and sent me to the store for New Moon. I then took Twilight on vacation to read--and my sister hijacked it. She then lent it to my mother, who then lent it to another sister (Big families suck sometimes), who returned it to my mom and by that time my mom thought it was hers. No worries, I wrestled it away from her thieving fingers last week, and I finally read it.

Jeff Savage posted about the morality dilemma that many people are debating about this book, if you want to read it, and some great comments, go here. I'm not going to debate the morality, mostly because I didn't have a problem with it. Yes, they spent the night together--BUT they did not have sex, they didn't even really make-out. And, the hero is a vampire that's trying to keep himself from killing her, so not only did they not have sex but he didn't kill her either--that's good stuff. To me, the story was fantastic (as in fantasy) enough that I did not feel it handed out any 'go to hell' cards. As I said before, my 13 year old read it before I did, then I heard the debates and I worried about what she'd been exposed to. But I've now read Twilight and New Moon, and it's just not an issue for me. They did not have sex. I don't think a teenager is going to read it and then think it's okay to do what Bella and Edward do--but they still did not have sex. Watch just one MTV video, or a shoe commercial for that matter and ask yourself if sex was on the agenda--I bet it was. In my opinion, the fact that there is a moral compass, the fact that such restraint is showed is a good thing. And the fact that it's a fantastic story (again, as in fantasy driven) I'm cool with it. I also told my daughter that if a vampire showed up in her room she was to tell me and not let him stay. She agreed that would be an appropriate response. We might need to come up with a signal.

So outside of liking the non-sex that took place, what did I think of the book? I liked it. Now, I have some complaints (of course, anyone that's ever had a conversation with me about any book I've read knows I always have complaints) and for me the problem with the book was that the story was boring. The precept was great, the hook was powerful, the writing was fabulous, the characterization wonderful, and the building climax was intense--but that whole 150 pages in the middle--yawn. I liked learning about the vampire stuff, and that nearly fooled me into thinking there was a plot, but then I'd read 18 pages of pure telling dialogue and realize that nothing was happening. The best books have good internal and external conflict that leads to ACTION, and there was tons of opportunity for action, it just didn't happen much. And yet, because of all the good stuff I liked, I read it anyway and, as I said, I liked it.

I picked up New Moon yesterday and finished it today. I liked it better than Twilight because stuff happened all the way through. As soon as my house recovers from my neglect, I'll read Eclipse as well.

And, I only have one book left on my summer reading thing 2007--Peace Like a River, which I can't seem to find anywhere in my two bookstore town. Annoying. But I am hunting it down tomorrow so I can finish my list.

I'd love to know what anyone else thinks of the series, and don't worry about spoilers for Eclipse. I basically know what happens, and I'll read it anyway. Also, according to Meyer's website there will be a book four, and a fifth book in the series that deals with some already written scenes from Edward's point of view--very cool idea.
Posted by Josi at 7:40 PM

What? There's a morality dilemma over this? Holy cow. I'd better not get started.

I agree with you on all points. Stephenie Meyer is a great writer and the premise and characters are terrific. But it's not a fabulous story.

I haven't read Eclipse yet because my teenager has been hogging it. But he's done now, so I'll get right on it.

ya know, I agree with you Luisa. I like Jacob better too. I like Edward as well, but not as much as Jacob who is the guy I would choose--I'd much rather have a guy that's human some of the time. Also, I can't help but picture Edward to be that guy from the movie "Powder" it was a good show, but the guy wasn't "hot". Great point.

I loved Twilight because of the characters and inner conflict. The climax bugged me a little because I thought Bella was acting like an idiot but I'm not sure how else it could have gone--I mean, there had to be a climax and if she'd been smart it wouldn't have happened.

Anyway, I haven't read the other two because I need a big block of time but I'll have to get to them soon because people keep telling me things that happen.

Sounds like an interesting read...I've been kind of leery of it, because of it's almost instantaneous popularity, but I may tackle it yet.

I'm glad to know I'm not the only one who doesn't have a problem with this book. Compared to literally everything else out there that our kids are exposed to---be it tv, books, music or just conversations at school---Twilight is tame. It's also great that mothers and daughters/sons are reading it. There's a lot of good to discuss there.

I really loved the first two. I haven't read the third yet but I love a good story I can get lost in.

It shows how little I am educated in really picking apart a story, but now that you mention it, I guess there was no huge plot.

I think the thing I loved was the tension and how it built. I had no problems with this story but I also am fascinated with "fantasy".

I always wanted to be magic and I would love to meet a vampire (that didn't want to kill me).

So, It has my vote. It is amazing that a book with no plot could be so gripping. I had no idea that could really happen.

I did love Jacob too. I really felt for him. In life, I have been more in his shoes than I ever was in someone like Edwards. I never got the guy either.

I've read all three and over all, I like them. I'll read #4 as soon as it comes out.

My 17 year old daughter and I have a mantra, "Bella is an idiot." We don't understand her motivation sometimes. And I really don't get this relationship. Why does Bella love Edward? Because he's beautiful. Why does Edward love Bella? Because she smells so good he wants to eat her. Now that's what deep and lasting relationships are made of! (That was sarcasm, just in case you didn't catch it.)

I also just have a personal issue with any story where the girl gives up everything to be with the guy. I have the same problem with Grease.

But anyway, even with all that, I liked the books. Her writing gets better with each book. And I'll quite possibly read them again.

What! You have two bookstores in your town, Josi? I'm so jealous.

After I drive 22 miles to GET to a town, I have WalMart, and, uh, well, WalMart.

But then, I have elk, and squirrels, and yikes! skunks in my forest.

I bought Twilight, but I haven't read it yet. All the controversy is quite amusing. If I don't finish writing this novel soon, I'll still have a virgin Twilight when the fourth book is old news.

Man, Luisa beat me here! She always beats me! I was going to be ticked about that "morality dilemma" too...good grief. This kind of stuff irks me. I'm glad you didn't jump on the bandwagon, and I'm quite certain nobody is going to hell.

So, here I am just copying Luisa...but if you're ever going to copy anyone, it should be her. She's one of my best friends in the world.

I'm so excited that you're going to read Peace! Be sure to let me know when your review is up -- I want to know what you thought.

I just finished eclipse last night. I liked it. It had some "Well as you know, Jack" telling moments, but I liked it for the most part. I like Jacob too better than I like edward. Edward has better manners but I'd rather be warm than cold any day.

As for the morality issue . . . I allowed my vision to be skewed by the comments of others and jumped on it too soon. I had assumed when everyone said the whole book was bella begging for sex that this meant bella spent the whole book begging for sex. Now that I've read it I'm wondering what the heck everyone got up in arms about and how dare I allow them to slant my own opinions before I've actually read the book. Sigh. I'm too impressionable and should stay out of all debates.

I have never heard of these books. I guess I live under a rock. But they sound interesting.

Stephenie Meyer is continuing the series? I didn't know that. That should be fun.

Yes, she does tend to draw things out and she made a HUGE mistake at the end of Eclipse. HUGE! But I still enjoy the books.

I agree with Janette, I thought Bella should have been tougher instead of obsessing about becoming a vampire all the time.

All that said, I really enjoyed the series. Next up -- one of Janette's books.

I guess I'll be different than everyone else and say I loved Twighlight better than the next two, but that was because the romance was soooo well done. I've always been a gothic romance fan, like Jane Eyre, even Victoria Holt when I was younger, and to me, Twighlight hit that old-fashioned, gothic romance nail on the head by having an older but dangerous suiter always lurking around. Also, I have always felt nothing but praise for Stephenie's ability (see my blog on this at rondagibbhinrichsen.com) to put in the religious theme of RESISTING temptation while entertaining the sensual-seeking national market. Even the cover--a symbol of Eve holding out the apple--and the beginning scripture from Genesis point to that theme. Truthfully, I loved the series and I recommend it to everyone.

Wow...I'm totally frightened to have my novel {whenever it's finished or published} read by most of you gals!

I loved The Twilight series...alot. But then again- Stephenie is one of my good friends and I admit I'm partial. Trying not to be partial {hard} I still think she is a fabulous writer and her plots are unique and fun.

Go for it Kimberly! I really enjoyed it.